I have a story that goes all the way back to New Year’s Eve.  It’s a good one — Kate was really excited about it and wanted to blog about it right away — but I was like, “Well… not yet”.  The story needed more time to develop.

I’ve been pretty blessed in my life and my career, because I’m able to access creative advisers on the other side pretty easily.  Sometimes they just show up on their own; I always try to listen because they all have something unique to teach.  So it was with the Notorious B.I.G..

I had never been a fan of his music previously, but his song “Juicy” had ended up on my iPod and I found that I was enjoying it.  Then I listened to it a 2nd time.  And then I noticed his energy around me.  I would describe it as “boyish”.  He felt young but self-possessed.  Class-clownish.  But super-focused at the same time.  I felt like I understood him right away, energetically.  He said, “Your relationship to money is fucked up.  I’m gonna help you sort it out”.

My relationship to money was, indeed, fucked up.  Actually I’m still untangling it.  The myth of the Starving Artist is a pervasive one.

At any rate I had to admit that Biggie was right, and furthermore I couldn’t point to any heroes of mine or any artists of any kind that I admired who had healthy relationships with money.  Not one.  They were penniless painters, alcoholic writers, and agoraphobic, opiated musicians.  (Aside:  I’m like, “…Sorry guys”.  They’re like, “Nope — that’s fair”.).  Biggie made money making art, enjoyed spending it, and was totally unapologetic about it.  That was unprecedented in my world.  Clearly I had some things to learn.

Later, Kate and I watched the movie The Secret.  Say what you will about it, I did learn a few things.  I was inspired by Jack Canfield’s experience to try to manifest $10,000 for myself.  With art.  I had no plan whatsoever, and I was pretty vague about my expectations around it.  Knowing it had to be something that I could believe I could have, I just said, “Okay.  I want to have a plan in place for making $10,000 by the end of the year.  Not the 10k itself; just the plan”.

Nothing happened for a long time after that.  I was still resolved that my plan was coming; manifestation is not always instant so I tried to be patient.

(Aside: I did have some prior experience with manifestation which bolstered my confidence with it and allowed me to be patient.  I had manifested a car for myself maybe 15 years earlier using techniques I’d read about in one of Julia Cameron’s books.  A free car had presented itself within a few weeks.  So I knew this would work).

So the year began to draw to a close with no plan in place for my 10k.  Oh well; it was just an experiment.  Kate and I stayed in and shared a bottle of wine.  As we talked she suddenly said, “Biggie’s here.  He wants to talk about your art”.

He says, “I’ve got a business plan for you.  I want to you do it, though.  I don’t want to go through this with you if you’re not going to do it. Will you do it?”

Biggie:  “Everyone’s got a spot in their bathroom that needs a fuckin’ seashell.  You’re gonna paint a hundred of them”.

At that point he goes into some more detail — take this many, send them to that gallery.  Reinvest.  Make prints.  Send remaining originals to 2 other galleries.  Etc.  He says,

“That’s how you’re going to make your ten thousand dollars”.

I’ve been good on my word and I am creating 100 seashell paintings.  I’ve recently photographed them and they are up for sale on my Etsy site; if you would like to own one of the first batch of the hundred I would be honoured to sell them to you guys. 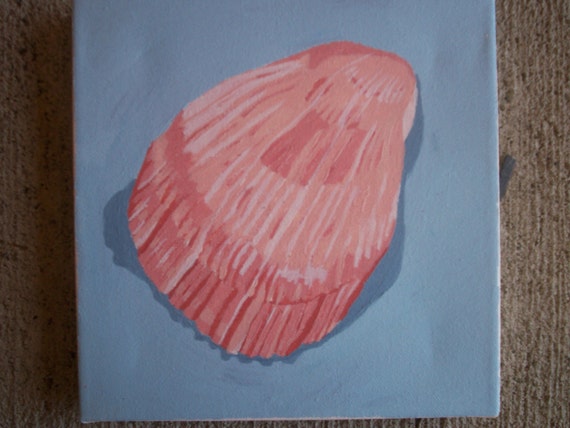 I also managed to screw my courage up to get my work into a gallery in the nicest resort in town; they’re scheduled to exhibit in a month or so.  So that’s really exciting.  It’s going to mean really great exposure for me and my work and it’s also one of my favourite places to hang out.  Kate and I both went for our birthdays and had absolutely the best champagne and cheese plates I’ve ever had while enjoying an unobstructed view of waves breaking on the wide open, sandy ocean beach.  I’m totally thrilled to be getting my art in there because everything about it is so top shelf.

And I’m so grateful to all my helpers on the other side who continue to motivate and inspire me.

I also have a tip to share for anyone who may have read this and thought to themselves, “Damn, my relationship with money is fucked up too — what do I do?”.  Here’s a tip I picked up recently for reshaping your relationship with money.  You’ll be drawing on your intuition here, so I’ll walk you through the process.  (Btw I recommend this process whether you have the money you want or you don’t, so you can fully participate in the Economy of Awesomeness!)

First try to encapsulate the idea of your money as a whole, in your mind.  Past, present, future.  Flowing in, flowing out.  Get in touch with any feelings around that.  Money is energy; you are in relationship to that energy.

The next step is to sit down and write a letter to your money.  Really imagine that your money is a person.  You can get specific if you want to imagine what this person might look like, but it’s not really necessary.  Just talk about your feelings, whatever they are.  You might be surprised to learn how you really feel about money.  Continue the process for 30 days.  It might seem like a lot but this will give you a lot more time to uncover hidden beliefs and allow you to reshape them to best serve you.

It does require a time commitment — is it worth it? Well, I’ve been at it for 3 weeks now.  And now while I fear I may lose people with the very mention of manifestation — I know some people think it’s “magical thinking” — I’m just going to go for it anyway and tell you another story about it:

I’ve taken out two student loans in my academic career, and paid these off.  Each time my lenders — different lenders, years apart — misfiled my paperwork so it appeared to them as if my loans were not repaid, and they continued to try to collect.  Without grievance, and from a detached point of view I can look at that and say, “Wow, how bizarre.  What are the odds of that?”.  I therefore I had an outstanding loan that was not really outstanding at all, that my lawyer seemed powerless to resolve.

So, I wrote letters to my money, and after 14 days a digital copy of a release from this loan materialized in my inbox.  This loan that had sat paid in bureaucratic limbo for more than a year.  (What had released the first loan, you might be wondering?  Applying for the 2nd one.  It remained in their system until the day the funds were released.  I literally had to call them and say, “Hey, you guys approved this second loan.  A condition for approval is that I have no outstanding loans — therefore, there is no outstanding loan.  Makes sense, right?”).

Magical thinking or not, it is hard not to think that my energy around money was holding these debts in place.  And Biggie was right — my relationship with money was fucked up.  And you know what else?  My thinking is magical.  It’s magic.

Besides clearing away several thousand dollars of energetic debt, in 3 weeks I also gained several hundred dollars of unexpected income.  Not bad.

So yeah, I think it is a worthwhile exercise.  If you’re already happy with how much money you’ve got coming in but you don’t like how you’re getting it, you can change that, too.

10 thoughts on “Biggie, Seashells and Manifestation”